It’s likely that all of us have detectable levels of these 2 classes of forever chemicals in our blood – DDT and fire retardents. 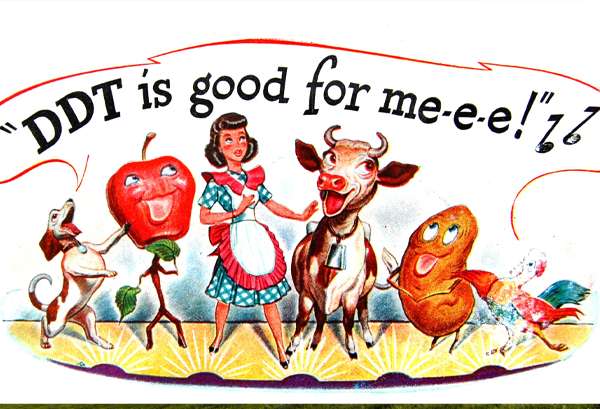 The phrase “Better Living Through Chemistry” is a variant of an advertising slogan DuPont adopted in 1935. The slogan was later changed to – “The miracles of science”. But some such “miracles” came back to haunt us.

There are more than nine million known chemicals (man-made and natural) including hydrocarbon fuels, proteins, fats, sugars, cellulose, pesticides, dyes and individual elements like lead and mercury. We are exposed to man-made chemicals through the air we breathe, the food we eat, the water we drink, and the products we use – plastics, furniture, food wrap, cookware, cans, carpets, shower curtains, electronics and hygiene items. They are pretty much everywhere around us. Unfortunately – many are toxic.  Scientists and researchers are concerned that many of these chemicals may be carcinogenic or wreak havoc with our immune and endocrine (hormone) systems.

In my experiences over the years of my career in this field, I have concluded that there are many cases in which:

1) The chemicals have been introduced without proper assessments;

2) They are sometimes used in dubious applications; and

3.) Many are not adequately regulated.

Moreover, consumers are often unaware of the degree of human exposure. This next 4-part set of articles will hopefully provide useful information on this topic.

THE DDT STORY – FROM MIRACLE “GODSEND” TO A SILENT SPRING.

In the late 1930s, Paul Müller, a research chemist at the firm of Geigy in Basel was searching for an insecticide to kill clothes moths. Some of his experiments involved a compound known as dichloro-diphenyltrichloroethane, (later shortened to DDT) originally made by a German chemist in 1874. The experiments demonstrated this compound’s effectiveness to kill insects even when applied in small doses.

DDT, the most powerful pesticide the world had ever known, was highly effective initially but also exposed nature’s vulnerability. It first distinguished itself during World War II, clearing South Pacific islands of malaria-causing insects for U.S. troops while also being used as an effective delousing powder in Europe – earning the Nobel Prize for its inventor in 1948.

DDT was considered a ‘Godsend’ in the 1940s and 1950s. It was thought to be effective and totally safe. In 1948, Life Magazine showed a photo of children playing in the fog of a DDT spray. 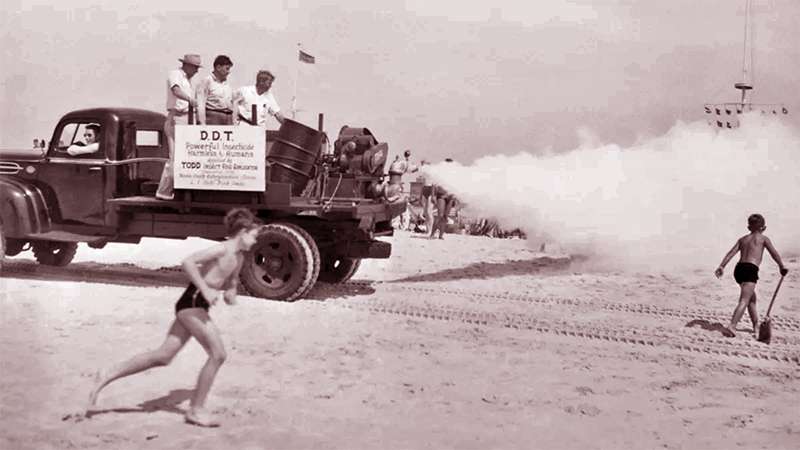 Then came the fallout. DDT use was killing wildlife and endangering human health and it did not take too long for this to become obvious. The information shock was mainly administered by the biologist and author – Rachael Carson who wrote the powerful book – Silent Spring. This iconic book became one of the key foundations of the environmental movement.  The book presented mounting evidence of the pesticide’s declining benefits plus its highly negative environmental and toxicological effects. The book stimulated widespread public concern over the dangers of improper pesticide use and the need for better pesticide controls. DDT was clearly shown to be very persistent in the environment, to accumulate in fatty tissues (and thus bioaccumulate) and to travel long distances in the upper atmosphere.

One phrase in the book stood out “every human being is now subjected to contact with dangerous chemicals from the moment of conception to death’. In fact – this prompted me to examine exposure in my own family. By the 1970s, I had access to the equipment needed to measure DDT and thus tested the concentration of DDT in my wife’s breast milk during the time she was breast feeding our youngest child. It was indeed detected but below the WHO safety level (which was of little comfort).

Despite a storm of push back from industry, DDT was banned in most countries by 1972. Today, DDT is classified as a probable human carcinogen by U.S. and international authorities.

After the use of DDT was discontinued in the United States, its concentration in the environment and animals has decreased, but because of its persistence, residues of concern from historical use remain.

The DDT story clearly demonstrates the dangers of rushing to market a chemical product and to promote its indiscriminate use. It could be argued that the issues around the longer-term environmental issue may have been challenging to predict in those days. But two of the product’s shortcomings should have been obvious.

It began in the early 1970s when regulators pressured tobacco companies to manufacturer self-extinguishing cigarettes. The goal was to reduce the risk of fires in homes, offices and elsewhere caused by negligent smokers. Tobacco companies did not want to change their products’ desirability and instead changed the narrative by working with the chemical industry.

Chemical manufacturers and tobacco firms launched an extensive media campaign. It encouraged furniture manufacturers to use flame retardant chemicals in their products to reduce the risk of fires. The campaigns and high-level lobbying worked and it soon became regulated that furniture, carpets, children’s pyjamas, car seats, and other household and office items were required to be treated with fire retardants.

Now let’s look at what these flame retardants are. DDT is an example of a very stable and often toxic chemical that is created when carbon and chorine are combined. When carbon binds with fluorine atoms many of the resulting compounds are even more stable with most now called “forever chemicals”. Hundreds of everyday products are made with fluorinated chemicals called PFAS (Per- and polyfluoroalkyl substances). Teflon is a PFAS. 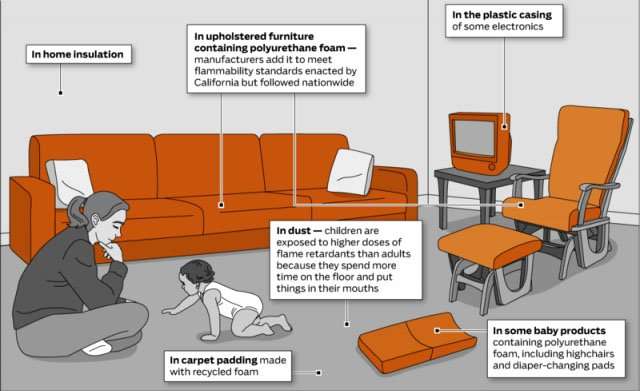 Fire retardants are everywhere in our homes. Exposure can be in the form of breathing in off-gases and microfibres, etc.

For years, scientists and environmental advocates have been concerned about persistent forever chemicals which break down very slowly and can contaminate the environment. It is likely that there are about 4,700 varieties of PFAS chemicals in use. Virtually all of us have detectable levels of PFAS in our blood. Very small doses of PFAS are linked to cancer, as well as harm to reproductive and immune systems.

But do they really work? Recent studies are showing that flame retardants often delay ignition for only a few seconds and can make fires more dangerous due to increased smoke and toxic gases. When flame retardants are present, fires produce halogenated dioxins and furans, which may contribute to elevated rates of cancer in firefighters. Many now conclude that self-extinguishing cigarettes would have been the correct course of action.

“Firefighters are like the canary in the mine. If there is a problem with these chemicals, we’re going to get it.  We’re exposed to the highest level.” (Jay Fleming – a senior firefighter in Boston as quoted in an article on this topic in The Guardian) — https://www.theguardian.com/us-news/2019/may/24/massachusetts-flame-retardants-firefighters-safety-cancer

Firefighters are at an especially high risk of chemical exposures and are thus advocating for fire retardants to be either banned entirely or to be significantly curtailed in their use. However, they face a powerful lobby – especially the American Chemical Council (ACC).  Out of 16 states which tried to pass flame retardant bans between 2017 and 2019, 12 failed. The ACC was registered to lobby state representatives in 10 of those 12 states.

The European Union (EU) has recently prohibited the use of halogenated flame retardants in plastic enclosures and stands of electronic displays and introduced several new labelling requirements for some hazardous substances. The new regulation took effect starting March 1, 2021. The chemical industry has launched legal proceedings as a result.

These 2 stories clearly demonstrate the challenges society faces in dealing with toxic man-made chemicals that – in my view – are introduced without proper assessments along with heavy-handed resistance by industry, to enhanced regulations. Upcoming articles will clarify the scope of these challenges.

PART 2 – OUR DAILY DOSE OF TOXICS – the ways in which we come into contact with man-made and often toxic compounds in our everyday lives.

PART 4 – REDUCING OUR RISKS – the actions we can take as individuals to minimize our exposures.