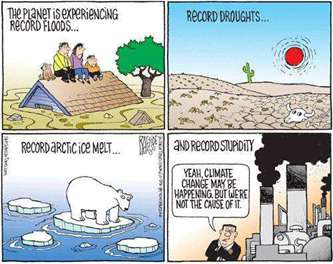 Recently a dear friend remarked that it must be so very frustrating for those of us in the environmental field to know how dire things are and yet see such inertia at the political level. My reply to this comment – “Absolutely – I’ve been following this issue since the mid-1980s and the outcomes of global warming are becoming reality even faster and more severely than the earlier predictions”.

In this article, I have attempted to address this inertia that can be so readily enabled by misinformation and disinformation (aka – BS).

SPECIAL NOTE – some of the links I provide in this article are from mainstream media and others are the full reports. In each case, for those interested, there are links that can be followed that will take the reader to the complete published literature – some of which required a fee. I have followed all the needed links to prepare this summary

THE CLIMATE CRISIS IS NOW

The climate crisis is no longer an abstract future or a news article about a far-off country. It’s here – it’s now. The world has witnessed a summer season marked again by historic heat waves, widespread drought, deadly wildfires, and torrential rains. More than 1/3 of Pakistan is currently under water displacing millions of people. The southwest of North America is experiencing the worst drought in over 1000 years with several states perilously low in water for irrigation and consumption. Rivers in Europe were too low for shipping goods. The Atlantic hurricane system is late this year but is impacting with devastating consequences.

Both NASA (National Aeronautics and Space Administration) and NOAA (National Oceanic and Atmospheric Association) affirm 2022 will almost assuredly rank in the top 10 warmest years on record with Europe and China both recording their warmest meteorological summers.  The world already sees twice as many days in which temperatures exceed 50C, compared to 30 years ago. This level of heat is deadly for humans, and hugely problematic for buildings, roads and power stations rendering these locations unliveable.

PREDICTABLE SKEPTICISM AND PUSH BACK

With the stark facts outlined above (and this is only a partial listing), it would be assumed that there would be a wide acceptance of the reality humanity is facing. But no! Climate change denialism is still out there even though the messages have been evolving.

Complete denial was the earliest tactic. It is very well documented that it was a multi-million-dollar endeavour in which professional public relations firms fought science with junk-science. But their message stuck thereby providing the salvation for politicians who lacked the courage to confront the global warming threat. https://environmentmatters.ca/climate-change-industry-knew-this-was-coming-2/

Over the past decade, the “complete denial strategy” by industry has crumbled in the face of the many dramatic realities of climate change along with the revelations that the  fossil fuel industry had been warned decades ago this was coming even from their own scientists. For this reason, the fossil fuel industries have been settling on a new tactic to avoid being properly and necessarily regulated. That tactic? DEFLECTION – using misinformation and disinformation. Social media and email chains then provide inexpensive deliveries of such false or misleading messages.

Here are some of the more common misconceptions that I continually come across in various forms.

CLAIM RE: NO CONSENSUS – global warming and the resulting climate change are apparent but there is no real consensus as to the cause. This claim is incorrect. The consensus is almost 100%. Here is a list of 200 scientific organizations all over the world (science academies and associations) that hold the position that Climate Change has been caused by human action. https://www.opr.ca.gov/facts/list-of-scientific-organizations.html

This is not a trivial list and covers almost all relevant science around the world. A late comer to this list is the US national association of physicists. In 2015, this association hedged somewhat. This year however, the society of 50,000 physicists adopted a new policy without any caveats concluding that ‘anthropogenic greenhouse gases have become the dominant driver of global climate warming observed since the mid-twentieth century.”. https://insideclimatenews.org/news/11112021/american-physical-society-climate-change-statement/ 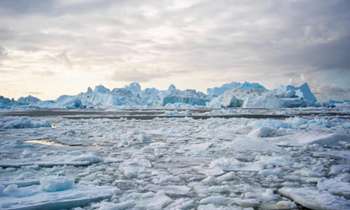 The collapse of the Greenland ice cap (now melting at a rate of 10,000 cubic meters per second) is one of the tipping pClioints that may already have been passed. Photograph: Ulrik Pedersen/Getty Images

Dangerous tipping points – The climate crisis has now driven the world to the brink of multiple “disastrous” tipping points, according to a major study. https://www.theguardian.com/environment/2022/sep/08/world-on-brink-five-climate-tipping-points-study-finds. The study shows that some of these may already be imminent due to the 1.1C of global heating already caused by humanity.

CLAIM RE: NATURAL AND GEOLOGICAL CYCLES – The climate has always been changing so how can the current warming be attributed to human activity? Afterall, the claim continues, earth has experienced ice ages and warm interglacial eras over millions of years. There is no doubt that Earth’s climate has fluctuated through deep time, pushed by several different causes or “forcings”. But none of these can explain the warming over the last 100 years which is why the consensus among scientists is almost 100%

Firstly, solar activity and volcanos were initially (1980s and 1990s) identified as possible causes but have now been clearly discounted as factors as they demonstrate trends that do not correlate. In fact – volcanos are more responsible for global cooling. As well, natural variabilities have been well documented but not correlated to the current warming. These variabilities are due to ocean current oscillations – the most well-known are El Nino and La Nina. Natural and more localized variations also explain what is known as the so-called Medieval Warm Period over the northern Atlantic. “So-called” because at the same time there was also a Medieval Cold Period in Siberia. 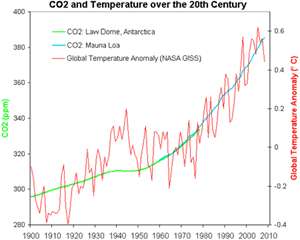 There is almost 100% consensus among scientists linking global warming with CO2 emissions due to the burning of fossil fuels.

Ice Ages – A more complex discussion centers around the various orbital cycles. By the early 1900s, scientific investigations were able to identify the causes of ice ages and interglacial warmer periods. Over time (thousands of years), the varying gravitational pull of the larger planets in the solar system stretches the Earth’s orbit from a circle to an ellipse and back again. These orbital changes create cycles of about 100,000 years – the same length as the longest ice age. They are also called Milankovitch Cycles named after the scientist that first published on this finding.

There are other geological and natural cycles. Here is a link to one of the better explanations of these forcings along with the explanation as to why things are different for explaining the current warming. https://www.quantamagazine.org/how-earths-climate-changes-naturally-and-why-things-are-different-now-20200721/

CLAIM – EARTH HAS ALWAYS HAD CLIMATE DISASTERS (heat waves, wildfires, floods, droughts, hurricanes, etc.) before – how can these current ones be any different?  The facts – global warming is making these events worse.

Forest fires are increasing in intensity, frequency, and size. Moreover, the fires are occurring at higher altitudes and in more northerly regions – even Siberia – thus threatening carbon rich tundra. https://environmentmatters.ca/wildfires-impact-of-climate-change-sept-23rd-2020/

Attribution Science – is an important and vital emerging discipline in the environmental research field. Attribution science can determine, not if climate change caused an event, but if climate change made some extreme events more severe and more likely to occur, and if so, by how much. https://news.climate.columbia.edu/2021/10/04/attribution-science-linking-climate-change-to-extreme-weather/

Rise of Billion-dollar disasters – Perhaps economic impacts are more convincing to some sectors of society than climate change measurements and attribution science. For example, in 2021 climate disasters cost the USA an estimated $145 billion. The costs are increasing rapidly. Over the previous 4 decades, the country experienced an average of around 7 disasters annually that resulted more than a billion dollars of damage. But in the past five years, that average has jumped to nearly 20 such events each year with 2020 and 2021 being the worst on record. And this is just the US – it’s happening everywhere. Moreover – Insured losses from natural catastrophes have increased 250% in the last 30 years. https://www.washingtonpost.com/climate-environment/interactive/2022/billion-dollar-disasters/

So – getting back to the original comment – YES – it is so very frustrating that after all these years and with mountains of evidence, and a very broad scientific consensus, there is still a need to combat misinformation and political inertia.  And there is no mistaking that it gets even more frustrating and more damaging when reviewing the unfounded attacks on renewable energy and electric vehicles. This will be the focus of another blog this Fall.

There are several reasons to be somewhat hopeful though. Awareness of the risks is at an all time high. Young people around the world are mobilizing and even sounding like the adults in the room. The major automobile companies are phasing out gasoline and diesel-powered engines. Big industry groups (oil and gas, petrochemical) are facing major legal battles and are even having difficulty getting insurance to cover the costs of defending themselves. As well – there have been some positive developments politically – particularly in the USA. Let us hope reason and good science will eventually prevail.

As a final comment – I highly recommend the documentary – ‘Breaking Boundaries – The Science of Our Planet” – now available on Netflix and U-Tube. It explains the science in a very clear and concise manner and also offers hope that good science has solutions. Here is a link to the Trailer. https://www.imdb.com/title/tt14539726/